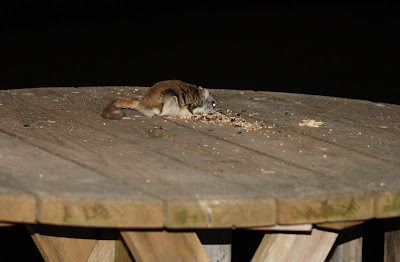 A flying squirrel.
Eating the bird seed on our back deck.
Honestly, I now have seen everything.

Actually, the first time I saw this creature was in mid-March. Because of the raccoons, I bring in our bird feeders at night, and one evening, I forgot about them until after dark. When I reached up to unhook the cylinder that holds black sunflower seeds, there was this rodent looking at me. Just hanging there, looking at me with these huge eyes.
Alien rodent eyes.
And it wasn't scared of me. It moved off the cylinder but it sat on the branch; it didn't take off.
I came inside and joked that I'd seen a flying squirrel. Why I guessed that, I don't know.

So last week, I thought this fella was our (now deceased) sick squirrel but as soon as I stepped up to the table, and it didn't run away, I could tell its marking, and its big eyes, were not a squirrel at all.
I googled "flying squirrel" and the photo matched this guy perfectly.

Actually, it's proper designation is a Northern Flying Squirrel.
This what the naturalists with the province of Nova Scotia have to say about this nocturnal creature:

Nova Scotia has two species of flying squirrels: the northern one, found throughout the province, and the smaller, southern one which is found in only two areas: the Gaspereau Valley and Kejimukujikk National Park.
They nest in the cavities of trees, and in outside nests, and they eat fungi (mushrooms and truffles), seeds and berries.

Of course, when I read this, I couldn't help but think of all the woods around us, and throughout Cumberland County, that are being cut down. Here is another creature whose habitat we are destroying:
"Flying squirrels' habitats are found in tall trees, snags, decomposing logs and relative understorey, which offer excellent gliding opportunities. Fungi are more abundant in forests with decomposing logs. Snags are used for nest sites. These habitat characteristics are generally found in older forests. Since older forests are becoming increasingly rare, flying squirrels are distributed in patches."

The above information came from an old article posted online by the Department of Lands and Forests, but here's a very engaging article about flying squirrels published in Saltscapes - with some great photos.