The Sight and Sound of Summer 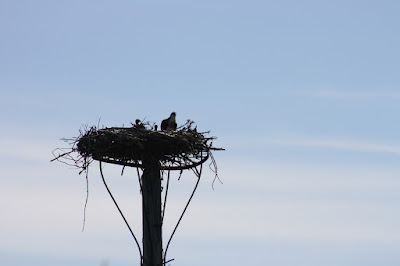 While watching the two ospreys feeding their babies early this morning, I realized I hadn't posted the news: There are two babies!
You can see their two round heads to the left of the parent.

Ospreys can hatch up to three - our old pair used to do three every year - but so far, we haven't seen three heads, only two.  In another week or so, if there are three babies in the nest, we'll have no trouble seeing them; they'll be getting big. Remember, they need to be flying and learning to fish by the end of August. That clump of nest that's in the photo, between the two baby heads, is now gone -- pushed down perhaps by the parents sitting on the edge of the nest more as they feed the kids.
The other morning, as I left for my walk, an osprey flew over with a fish dangling from its talons. That sight never gets old.

We are delighted and relieved that we still have a nesting pair of ospreys on our property. As I write, the sound of a parent chirping is floating in through my office window. I can't imagine summer in Nova Scotia without that sound. 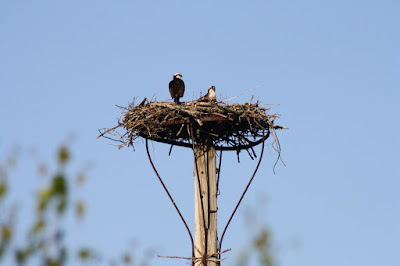 As we have from the moment the osprey pair claimed the nest in 2008, we continue to believe we are blessed by the ospreys. Even when it is a new pair, like this year's, who doesn't interact with us like our original pair did, we know they are here for a reason, and are an integral part of our rural, and spiritual, life -- as individuals but also as a couple.
This new pair sticks very close to each other and to the nest. Dwayne felt like the loss of the longtime mate last spring was a bad omen, so after his stroke in August, we're very much like these two: sticking close to each other and to our own nest.