A Father-Daughter Story for Canada Day 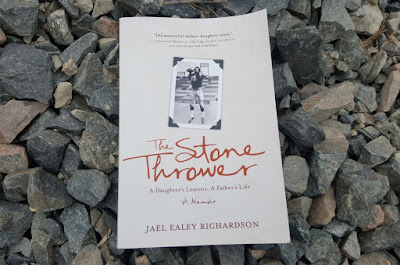 The author of The Stone Thrower (2012, Thomas Allen Publishers, now owned by Dundurn Press), Jael Ealey Richardson (JER), is a Canadian Black woman, born to two American Black parents.
When JER tweeted out the question, "Is your bookshelf racist?" I answered Yes. No qualifiers. No "But I read magazine articles" or "I have a couple of books by Indigenous authors." I realized that her question required a simple Yes or No answer and since there no books by Black authors on my shelves, there was only one, unqualified answer.
So I ordered her memoir direct from the publisher. It's not available at the usual online bookstores but I actually received it faster from Dundurn Press than I've received any books from Chapters online.
WHY DIDN'T I KNOW ABOUT THIS BOOK? WHY DIDN'T I READ IT FIVE YEARS AGO? OR EVEN ONE YEAR AGO?
Friends, this is the first book I've come across that compares to the memoir I've written about my father (which is now in the "polishing" stage, the final stage before querying). Although our family experience is different -- Jael Ealey Richardson was raised a middle-class Black Canadian while I was raised a middle-class white Canadian -- the theme of our books is the same: Who am I because of who my father was?
You know, unless it had been recommended to me (You should read this because you're writing about your own father) I wouldn't have chosen it; not firstly because it's about a Black family, although I'm sure that unconscious conditioning would play a role, but because it was about football!
I should know better: Some of the best books I've read are about subjects I have little interest in. And that's the gift of good writing: to take a personal story about a specific topic and event, and make it appeal to a wide range of people.
I mean, I'm writing about funeral homes...and everybody dies. The universality is kind of a given.
But this book about a football player AND about racism is a wonderful book. I cared about the football, I cared about the racism, I cared about JER's search for identity.  It's well-written but also well-woven; she blends her father's past, the near past (her upbringing) and the present very well. It's not confusing.
On this Canada Day, I've chosen to highlight this book because JER is a Canadian author, and her book deserves amplification -- published in 2012, it's more relevant than ever -- and because of this passage about 2/3 of the way through her narrative. We like to say Canada isn't racist -- but here's what JER wrote about the Black American refugees who escaped slavery in the 1800's by settling Canada:
"The refugees who were interviewed back then informed the [Freedmen's Inquiry Commission] that prejudice in Canada was rampant, that is was often worse than it was in America, but they also explained...but the LAWS in Canada supported freedom.
"It pointed to what my father had been up against all of his life -- a nation where the laws reinforced racism, segregation, and inequality. American laws created obstacles for basic rights and necessities..."
On a personal note, I dog-eared a whole lot of pages: 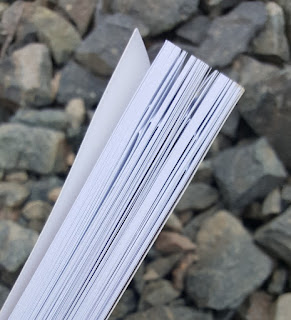 There are that many instances where Jael Ealey Richardson's narrative paralleled mine, where an expression, like "my father's quiet grace", made me yelp and underline because that's what I was trying to say.
This isn't a case of her book beat me to it so my book has no market; our books are very different -- Black and white, football and funeral service, US/Canada and Canada/East Coast -- but it actually makes my heart hum with excitement that our theme is the same. It tells me I've written the right book. It tells me that my book actually has a chance.
It tells me I should have read this book a long time ago. For ALL the reasons.
Happy Canada Day.
Remember that we are built on the backs and with the lives of our Indigenous Peoples. Without them, we are not a nation.
Remember that racism exists in Canada, and has despite the fact we were the end of the Underground Railroad. The Black and Asian people who helped build our country, and who contribute so significantly to it despite how they are treated, are a vital part of our nation. Our diversity is something to celebrate, to bring us together as HUMANS, not something to divide us.
Stereotypes are wrong. Us versus Them is a waste of time. We know better; we should be doing better.
We can protest even as we celebrate because we are Canada. We are the true north strong and free -- and we must do better.
Posted by Sara Jewell at 10:26 am