The Death of a Chicken, Then and Now 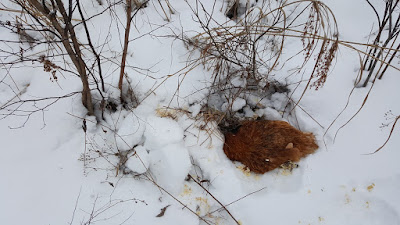 When I first moved to Nova Scotia and married Dwayne, our first goal was establishing a flock of chickens.

A year earlier, before I'd even met Dwayne and while vacationing alone at our then-summer home on Pugwash Point, I decided having a chicken coop in my backyard was a major sign of success. It meant I'd accomplished something.

So Dwayne made that dream happen.

Chickens are a great way to start with farm animals (sadly, despite my greatest efforts, they have not proven to be a gateway to bigger livestock); they are easy to take care of, but there was a bit of a learning curve for me (often involving my Disney-style of chicken keeping and Dwayne's longtime country boy style). Especially when it came to dead chickens.

It's been over 12 years since we built the chicken coop and moved in an ever-changing flock of hens; we're on our third rooster. Our first one was short-lived; being inclined to fly out of the pen, he was grabbed by a fox on his third or fourth day with us. When it comes to death and the chickens, we've been lucky; we haven't had any issues with marauding raccoons getting into the coop, or the pen, and killing a bunch of hens all at once. We lost one pet hen, Betty, to a fox -- she was snatched out of the yard while Dwayne was mowing the lawn!

On the other hand, Sasha, who suffered a terrible head injury at the beaks of her fellow hens, survived the attack then survived free-ranging all over the yard as she recovered. That's the hen who passed away of natural causes, but ended up riding around in the back of Dwayne's truck in the days following his stroke.

That marked the first time I personally disposed of a dead hen. Up until then (2018), I'd always left it up to Dwayne to get rid of the bodies. But the day after he returned home from hospital, I realized what his chore the week before was supposed to be -- and we both realized he'd forgotten to drop Sasha's body off in the woods on the way into town. It was up to me to drive the truck, with Sasha's decomposing body in the back (remember, this was August!), up the old lane and cart her deep into our woods where the dog wouldn't find her.

I placed her under some ferns and placed leaves over her body. As I held my breath.

From then on, disposing of the bodies of dead hens was my job, which is why they now get a burial and a little ceremony.

When I think back to the first time I opened the coop door to see a chicken lying dead on the floor and remember how I freaked out and cried and couldn't deal with the floppy-headed body, it's a source of pride (okay, this might get weird) that I now can pick up a body, place it on the shovel and take it out to the field to bury it.

Or take it into the woods and place it in a snowy grave where the fox might find it.

This was the subject of one of my essays in Field Notes, and it keeps coming up: how people in the country, people who live around wildlife, who have livestock live closer to death than people who live in towns and cities. Many of us experience the death of a pet, but the consistency and dependability of death in a rural area is unique, I still believe, and gives us a greater appreciation of life and a better equanimity about death.

What do I say to a hen I'm burying?
"Thanks for the eggs. Thanks for being a good hen."