First published in The Oxford Journal on Wednesday, October 31, 2012. 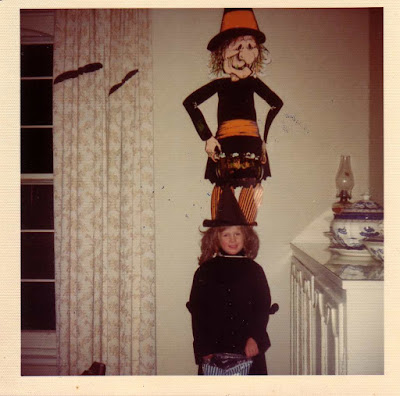 When I told an acquaintance that we were building onto our house because my mother was moving in with us, her response was, “Ohmygawd! I could never live my mother. She’s such a WITCH.”
Most women grow up to be a replica of their mother (for better or for worse) but I have to admit, since that woman’s comment popped into my head last week, when I think of witches, I think of my mother. Especially as Halloween approaches.
Because this is how a writer’s mind works: I have a column to write that will be published on Halloween. I’m not really into this  particular event, haven’t worn as costume since high school, don’t have kids that make it necessary to do Halloween but it doesn’t make sense to write on any other subject when the column appears on October 31. So I think about the way my mother did Halloween for her two daughters in the seventies: our homemade costumes and the Halloween table cloth and how we went trick-or-treating in town then piled into the car to visit relatives in the country, just like many people around here do. We had to visit Grandma and Grandpa, and Grandma and Grandpa George, and Aunt Reta, and then the Stinsons on the way back home. That drive to the country was as much Halloween to us as the witch that hung on the wall of our dining room.
But I didn’t remember the old crone until I started thinking that maybe I could get away with writing a non-All Hallow’s Eve column and that woman’s comment popped into my head and that’s the magic – a little witch’s brew, if you will – that happens when a writer has to come up with something to say on a well-worn topic.
Because that witch hanging on the dining room wall was as fun and silly and good-natured as my mother, as part of the magic my mother created for her two girls on Halloween as the wig of long, matted brown “hair” from the beauty salon next door and Mum’s old fox fur coat.
Perhaps I can think up a costume for this year: I’ll be a writer. It’s a rather tricky kind of costume, mind, a bit cobbled together like Frankenstein’s Monster. You can bring the bowl of candy up to my office where I’ll be hunched over my computer (Hunchback of Notre Dame), hacking away at my words (Texas Chainsaw Murders), trying to conjure up memorable phrases (Sorcerer’s Apprentice), and hoping that the readers like them (Sally Field winning an Oscar at the 1984 Academy Awards).
On the other hand, it might be easier to be a witch. Just like my mother.