To vote or not to vote? There Is No Question

As published in the Citizen-Record newspaper on Wednesday, October 7, 2015, by Sara Jewell. 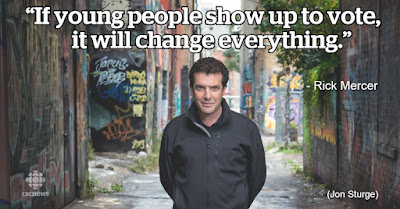 This time two weeks from now, it will be all over but for the recounts. The longest federal election campaign in recent history will be finished but for the recaps and recriminations.
This time two weeks from now, whether you are pleased with the outcome or appalled by it, will you have had your say?
Because it matters that you vote.
Because it matters that you can vote. Without fear for your safety, without knowing the election is rigged and the outcome already decided, without walking 20 kilometres and standing in line for five hours.
It’s so easy to vote, what excuse could you have not to?
Too busy or too confused? Too disgusted? Too lazy? Or perhaps you are one of those protest voters who spoils the ballot. What a waste of an opportunity. There is no reason and no excuse not to vote. At the very least, vote because someone in your family died overseas in order to ensure our freedom to hold fair and open elections.
Yet voting in our election can see like a daunting task, when we are overwhelmed by sniping and sound bites, platforms and platitudes. But like any big job, it’s best to start with one small action.
My friend Alison invited me to attend a gathering with the local candidate of her choice and during our drive to the event, she said something that I want to share with those readers who claim they don’t know how to vote or feel that their vote doesn’t count.
“My advice to someone who doesn’t know who they should vote for is to decide what matters to them,” Alison said. “Figure out what issue or issues are most important and then go to each party’s platform and see what they have to say about it.”
So far, the topics that have dominated the national election campaign are the economy, security, and, just recently, the niqab.
If those topics mean nothing to you or your family, for Canada’s sake, don’t use them as a reason not to vote.
It means your vote counts more than ever.
In June, an Abacus Data poll revealed that 58% of Canadians indicated health care was one of their top three priorities yet federal transfer payments to the provinces continue to shrink. We live in a province with a population that is both ageing and declining. Perhaps you could consider health care funding an important issue.
If you have a family member with dementia, you may want to see if any party is offering a national dementia strategy since Canada is currently the only G7 member without one. Perhaps that could be an important issue to you.
Child care. Hydraulic fracturing. Military spending. Employment insurance. Pensions.
Perhaps any one of these could be an important issue to you.
You only need one to give you a reason to vote. It’s nobody’s business who you vote or why; it only matters that you do.
Because you can.