First published in The Oxford Journal on Wednesday, April 10, 2013, by Sara Mattinson.

Born in Springhill, the youngest of seven, Rose Hunter felt the call of the wild west when she was 22 years old. She went to visit family in British Columbia in 1981 and ended up staying. She met and married Jeff Horsman and the pair lived in the northern town of Chetwynd for 30 years.
“Family brought me back,” says Rose of the couple’s decision to return to Nova Scotia in 2006 (Jeff is originally from Moncton). “Jeff retired [from BC Rail] and we decided to move back home to be with family. My mother was still alive and my sisters and brother.”
Rose and Jeff settled on the Dickson Road between Port Howe and Oxford with their three dogs and three cats. Rose is known for her huge garden, her jars of pickles, and her generosity with vegetables and sunflower seeds. That garden had humble beginnings, however; it began with just a few rows dug the first summer. Then a neighbour loaned them a rototiller.
“Jeff went crazy,” Rose says, “but I’m obsessive. When I get started I can’t stop. Actually, the gardening is Jeff’s fault,” she laughs her distinctive deep, raspy laugh. “When we lived out west, in town, we had a ravine in back of our house and it was sloughing off so we ended up terracing it off. We threw a garden in there and it kept growing. Then we moved outside of town and the garden just kept getting bigger.”
It seems they quickly fell into the same pattern here.
“I love anything to do with food,” Rose says. “I pick wild mushrooms, I pick all the berries, I make jams and jellies and pickles. I garden. Anything to do with food. I remember the first time we butchered the ducks and geese and the turkeys and harvested the big garden. There’s a picture of me sitting at the kitchen table, totally exhausted, with all these ducks packaged up for the freezer and summer savoury hanging in the corner and the table just piled high. Wow! I did that. When I lived out west, I used to can a lot. Meat, fish, anything that walked through the yard I had it in a can. I don’t can so much here, mostly pickles and jam.”
Their garden right now measures 200 feet by 200 feet.
“It’s too big,” Rose admits. “Found out last year, it’s too big. Couldn’t do it.”
Anyone who has driven up the Dickson Road is familiar with Rose’s unique landscaping skills: Chickens, guinea hens, geese and ducks used to roam freely all over the property and driveway, even onto the road. But Rose and Jeff butchered all the chickens and guineas last fall, and this summer, Rose plans to only do half the garden and raise turkeys instead.
There is a very good reason for this huge cutback.
“Last year, I started getting pain in my wrists,” Rose explains. “I was busy doing this, busy doing that, I had an order for ten cases of pickles. So I thought ‘I’ll get that done, it’s just carpal tunnel.’ But it got worse and worse. That’s when I went to Moncton to see a specialist and the report came back that it was not carpal tunnel. So I went to the doctor in September and he sent me for a whole workup. In October, they found a mass in my right lung.”
Scans, blood tests and x-rays also revealed abnormalities in her stomach and lymph nodes. But all Rose could focus on was the pain in her wrists.
“I couldn’t brush my teeth or have a shower.  I couldn’t even put a sock on. I couldn’t do my chores. I was getting very depressed. So when they said it was in my lung and stomach and lymph nodes, I thought, forget it. I hadn’t been able to do anything for a year now, why bother.”
Because of the pain, because of the diagnosis, she got rid of all her chickens. She was going to get rid of the ducks and geese, too, “but Jeff promised he’d take care of them.”
Fortunately, the abnormalities and the pain were connected to the mass in her lung.
“I went in for a biopsy on January 18. Within a week of getting the results, the surgeon told me he’d would get me in for surgery.”
On February 15, the surgeon removed half  of Rose’s right lung and a few lymph nodes as well.
She stands up, turns and raises her sweater to show me her scar. It is long, thin and purple. It is shockingly...simple: eight inches long, curving from under her armpit up towards her neck.
“I go back in three months for another CAT scan and a follow-up. There’s no other treatment.  It wasn’t the kind of cancer that spreads and likely I’d had it for a couple of years and it just kept getting bigger and bigger. But the cancer gave off hormones that caused the pain in my wrists.”
Not only that, this lifelong smoker of two packs a day quit smoking the day before her surgery so as of today, which happens to be Rose’s 53rd birthday, she is 56 days cigarette-free.
Rose looks great and is very  cheerful but then again, this health scare has given her a new outlook.
“First of all, it reminded all of us that anything can happen at any time. The family decided to be a little bit closer. We lost Mom a couple of years ago. Second, slow down, take more pleasure out of things. You don’t have to kill yourself doing a huge garden. You can do half a garden and be able to take care of it.”
In the yard, the geese have started honking loudly enough to stop our conversation.
“That’s the other thing,” Rose says. “I’ve always liked to have animals that are noisy.”
And she laughs that deep, raspy laugh that reeks of gratitude and optimism. 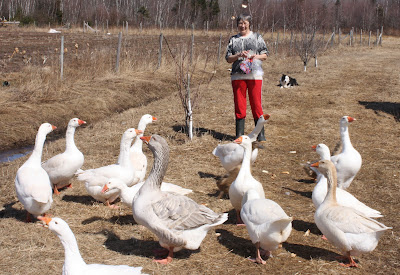