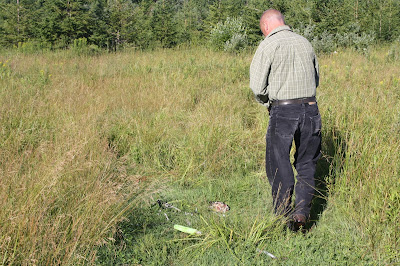 When you live next door to ospreys, when you spend April until September watching them and listening to them, you know them like you know your own family members.
You learn the difference between a food chirp and a location call. You know when you'll see the heads of the year's hatchlings for the first time and you know that each bird is born a week a part so that means there always will be one youngest who is the last to fly, who is the last to leave the nest. You get as excited as they do whenever a fish comes in; if you're my husband, you can identify the fish clutched in their talons and sometimes you are envious of the nice trout the bird has caught.
You know when there is no longer a baby in the nest.
This intimacy means that when something happens, something devastating, you are heartbroken. I've thought the worst thing that could happen would be the nest blowing down in a storm but now we know that is not the worst.
When I passed by the nest at the start of my walk this morning, I wasn't surprised that I could see nothing in the nest; in the mornings, when the parents are fishing, the baby has been hiding. But on my way home, I knew something was wrong. By that time, I should have been seeing two -- the baby and a parent -- standing on the edge of the nest.
At home, my mother and my husband were sitting on the back deck.
"I've been watching a long time and I haven't seen any movement, not a head or wing flap," Dwayne said.
My stomach hollowed out.
After letting the chickens out of the coop, I saw an osprey sitting on top of the tree at the end of the house, watching the nest. This is not normal; it's either in the nest or fishing for food. And this was not the baby; it wasn't ready for that kind of flight. This meant something.
As the other adult flew to the nest with a fish, the osprey in the tree flew over and then we know for sure: There was no baby in the nest. The osprey from the tree stayed in the nest, chirping, chirping, chirping. I finally had to go inside because the sound was breaking my heart.
I feel like I've written that before.
Half an hour later, I decided to walk over to the nest, to talk to the osprey, to ask it, "Why did you leave it alone? Is the instinct to go fishing at daybreak stronger than the instinct to protect your remaining baby?" We can walk right under the nest and the birds will look down at us, will talk to us as we talk to them.
And that's when I saw the feathers on the path.
The eagle did indeed return to take the last osprey chick. 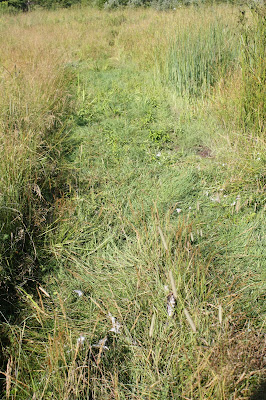 We don't know when, none of us heard anything early this morning, but we do know -- by the crime scene -- that an osprey parent must have returned to the nest while the eagle was plucking the feathers off the baby in the grass right below the nest. Given the light trail of small feathers along the path that runs through the field, and the carcass, there was a battle for the (already dead) baby and the osprey won. They must not make any noise when fighting -- I find that hard to believe given the bellowing that came out of me without thinking -- but we heard nothing. There was nothing we could have done anyway.
But I'm glad there was someone there to attack the eagle again.
There is no way the eagle would have left its food behind unless it was being attacked and simply couldn't get away with it.
We decided not to bury it but instead to take the carcass away from our property and return it to nature, either through decomposing or scavengers. As Dwayne and I were walking back towards the house with the carcass, the eagle screeched at us.
It was that close.
Waiting to come back for its meal.
This explains why the osprey was in the tree; it was guarding the body of its chick. It was ready to attack the eagle when it came back for it.
I was carrying the shovel and if I could have seen where the eagle was, I would have gone after it. You know I would. If I could have beaten it to death with the shovel, I would have. Imagine screeching at us as we took its food away. Bastard.
"The eagles will take over the nest now," Dwayne predicted. I know what he means: Once the babies are out of the nest, and until this year that meant flying on their own, the adults don't return to the nest much. What reason do they have now to come back to the nest before flying south next month? Surely they don't want to look at the feathers of their chicks strewn over the field.
But I'll be damned if the eagles will take over the nest. If I have to climb up that pole with my plastic chair and my shovel and sit in that nest until April 2016, I will keep those eagles from claiming this nest.