An update on the osprey we saved is not the outcome we were hoping for.
We learned late Sunday that there were more than a couple of puncture wounds on the snatched osprey chick; eagles have a total of eight talons, after all. A puncture in one wing was of concern because if the osprey couldn't fly, it wouldn't be saved. But it turns out, a lung was punctured and he died while under anesthetic to fix all the holes in his little body. Apparently, he was gurgling during surgery and the autopsy revealed what had been suspected all along.
It would have been nice to return one of the two snatched babies to the nest. Apparently, he was in good health.


Now there is always a parent in the nest with the lone youngster, who is now hopping up and down and flapping its wings. If birds communicate, I imagine its parents are saying, "You've gotta get flying, chickie. It's a matter of survival now."
It's time to fly and learn to fish and grow strong and return to beat the crap out of the eagles. But that could just be me talking.
He should grow stronger quickly now that he is the only one being fed. We are cheering him on every time we see him standing on the edge of the big nest, flapping his wings.
Yesterday, I took a walk through the field to get a photo of their new vigilance of our airspace and my dog confirmed our suspicions about the other missing baby: She found the spot where the eagle had landed and plucked the baby before flying home to its own nest with the meal. 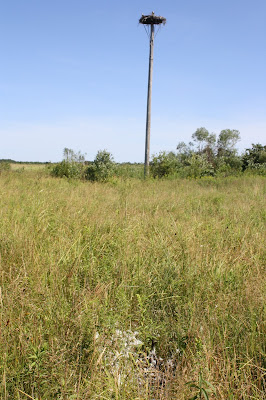 I collected some feathers; it didn't seem right not to. These birds are like members of our family and these are a remembrance of the two we lost this summer. I know it's nature and it happens all the time (we've been lucky it hasn't happened till now) but it's still brutal. 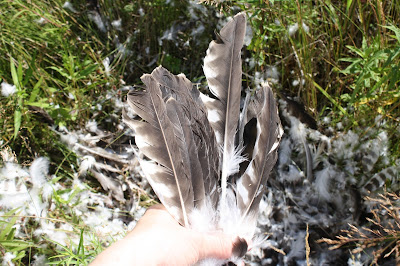