We Are Bird Protectors

You absolutely do not mess with our ospreys.
If you do, I'm coming after you with a plastic lawn chair.
At 8:30 this morning, I just happened to be outside and looking across the yard at the osprey nest when an eagle swooped in. Even with its wings obscuring the entire nest, I knew what it was doing: Snatching one of the babies.
The eagle dropped down to the ground, out of sight in the tall grass and brambles.
Which likely saved the young osprey's life.
Along with my full-throttle, full-voiced charge across the yard, over the bridge and into the field where the osprey nest is.
"LET IT GO. LET IT GO. LET GO!" I roared.
Apparently. All I remember saying is, "Holy fuck!" over and over again.Once I picked up the chair we leave at the edge of yard for bird watching and headed into the field, I was in the red zone.
The eagle heard me coming, looked at me then hunkered down. When I kept coming -- fully intending on beating it with the plastic chair until it let go of the chick -- it flew away. Not far but far enough for me to run back home, shouting for my husband and thinking of gloves towels boots, gloves towels boots, call for help, call for help.
The osprey has a cut above one eye, which flooded the eye with blood, and a puncture wound in its breast but once we put it in the large pet crate, it was alert and standing. Its wings are not broken. When it heard its nest-mate chirping after a parent ("What the hell happened to your siblings?") brought in a fish, it turned around in the crate so it was looking out the door.
I was fully prepared to have rescued a dying bird; it was such a relief to see it strong and surviving.
"I always wanted to hold one of these birds," my husband said, "but not for this reason."
As a side note, my husband says the osprey's breastbone comes to a V-point for aerodynamics and its sharply-curved talons latched right on to his gloves. 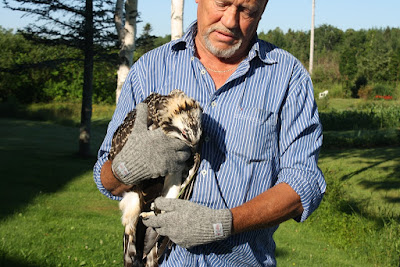 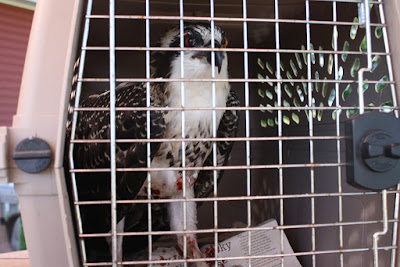 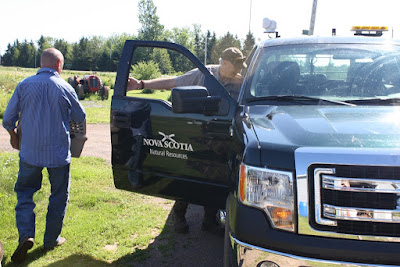 The young osprey, just days from taking its first leap into the air and learning to fly then fish for itself, is now at the area's wildlife rehabilitation centre and we were told it's likely, if the bird heals, that he or she will be released right back here.
At home.
My voice is raw, my nerves are shot, one of the three osprey babies is unaccounted for,
but
we saved one of our osprey today.
For the first time since they nested on our rural property seven summers ago, they were attacked.
I could have been anywhere else -- getting another cup of coffee, using the bathroom, feeding the cat -- but I was at the right place at the right moment, at the very least to know the answer to the question we would have asked later when we realized there was only one baby in the nest: What happened to two of the babies?
Forget the lawn chair. I would have throttled that eagle with my bare hands if he or she had refused to let go.
You don't mess with our babies.
Posted by Sara Jewell at 3:12 pm